Mahón has become the perfect destination to enjoy a well-deserved vacation on a wonderful island called Menorca.

Maybe this is because Maó, its Catalan name, is the capital of Menorca and has been granted with everything to attract the tourists' attention. It has a 5-kilometre magnificent natural port, considered the largest in the Mediterranean and the second in Europe. Its long promenade makes this city the most prominent place in Menorca to party and enjoy the island’s nightlife while gathering on the many terraces, but also important are the restaurants and bars that you will find here.

In addition, it has several tourist attractions such as La Mola Fortress or the Sant Roc Stronghold among others, along many charming and unforgettable beaches. Come and live it firsthand! 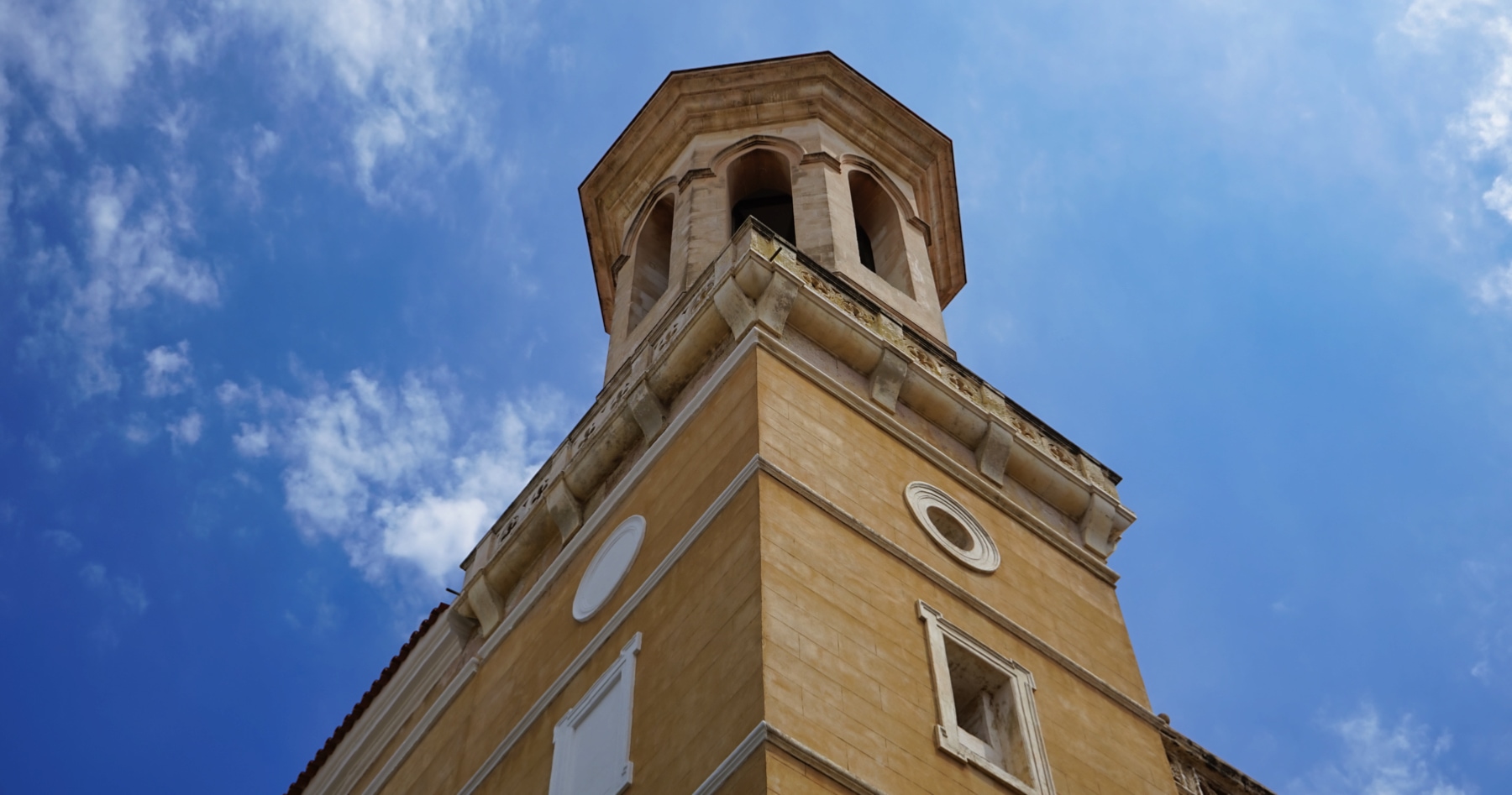 How to get there

We can get to Mahón by boat from Palma de Mallorca, Valencia or Barcelona. Its port is also a stopover destination for many cruise ships.

There is an airport in Menorca and is conveniently located only 5 minutes away from the city centre by car.

Once you arrive in Mahón, walk around the beautiful port and also around the city centre to make this first contact an essential step to see all the interesting corners.

Taking a stroll through Mahón old town is undoubtedly fascinating and you can also learn a little about its history and culture. From the town hall as departure point, we will find different and prominent buildings in the city such as Santa María Church, which holds the International Organ Festival, La Concepción Church, the theatre or Menorca Museum, the latter being housed in an old Franciscan convent.

If you walk down Isabel II Street, you will be able to see impressive manor houses.

Go to the famous Miranda Square and relish the panoramic views of the harbour, then cross the square called Plaza de la Conquista to see a monument honouring King Alfonso III, who conquered Menorca from the Muslims.

This port is one of Mahón major assets for its attractive natural characteristics and charm. You can enjoy it walking or on board of a yellow catamaran, an interesting alternative to explore all corners. 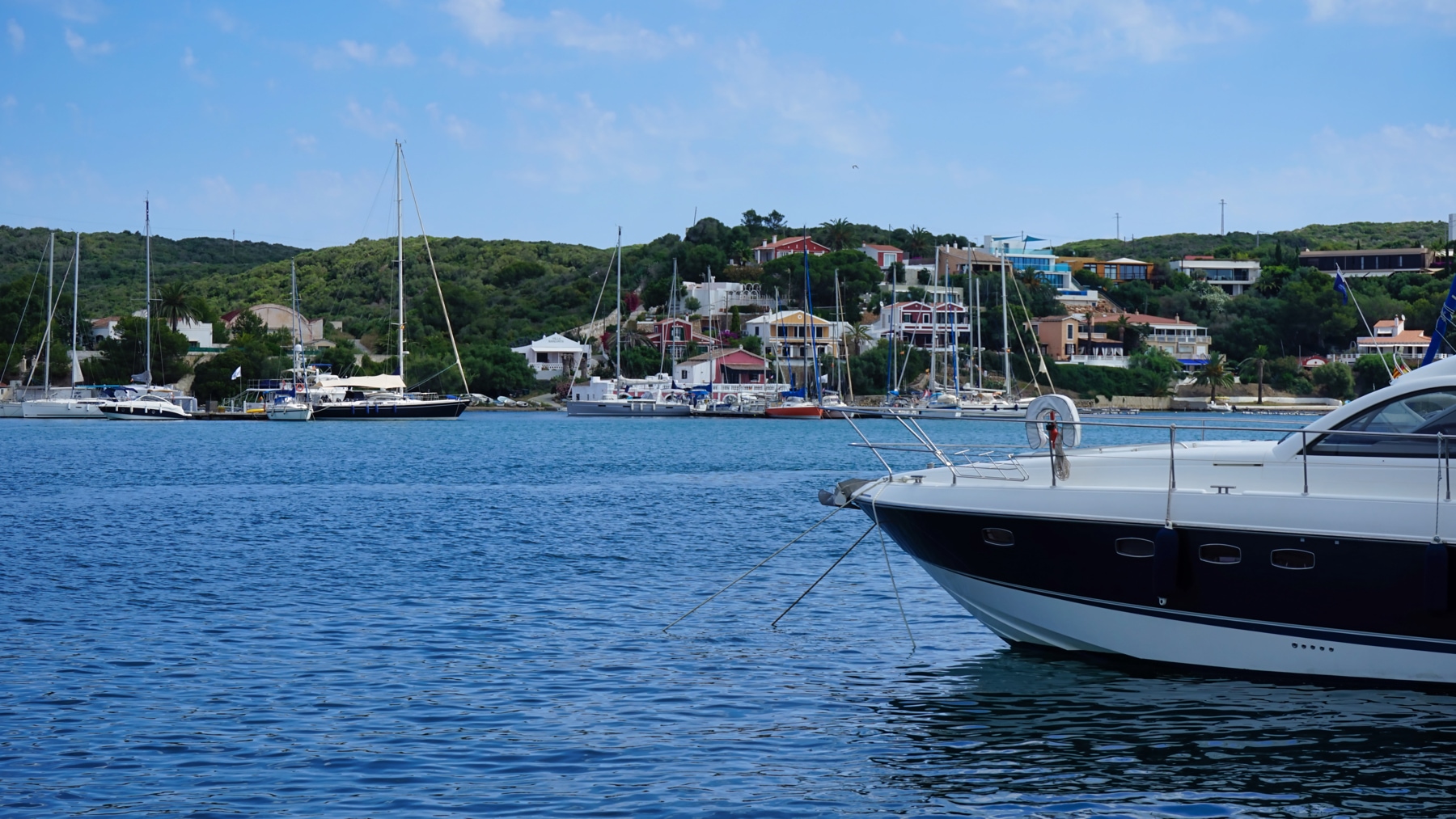 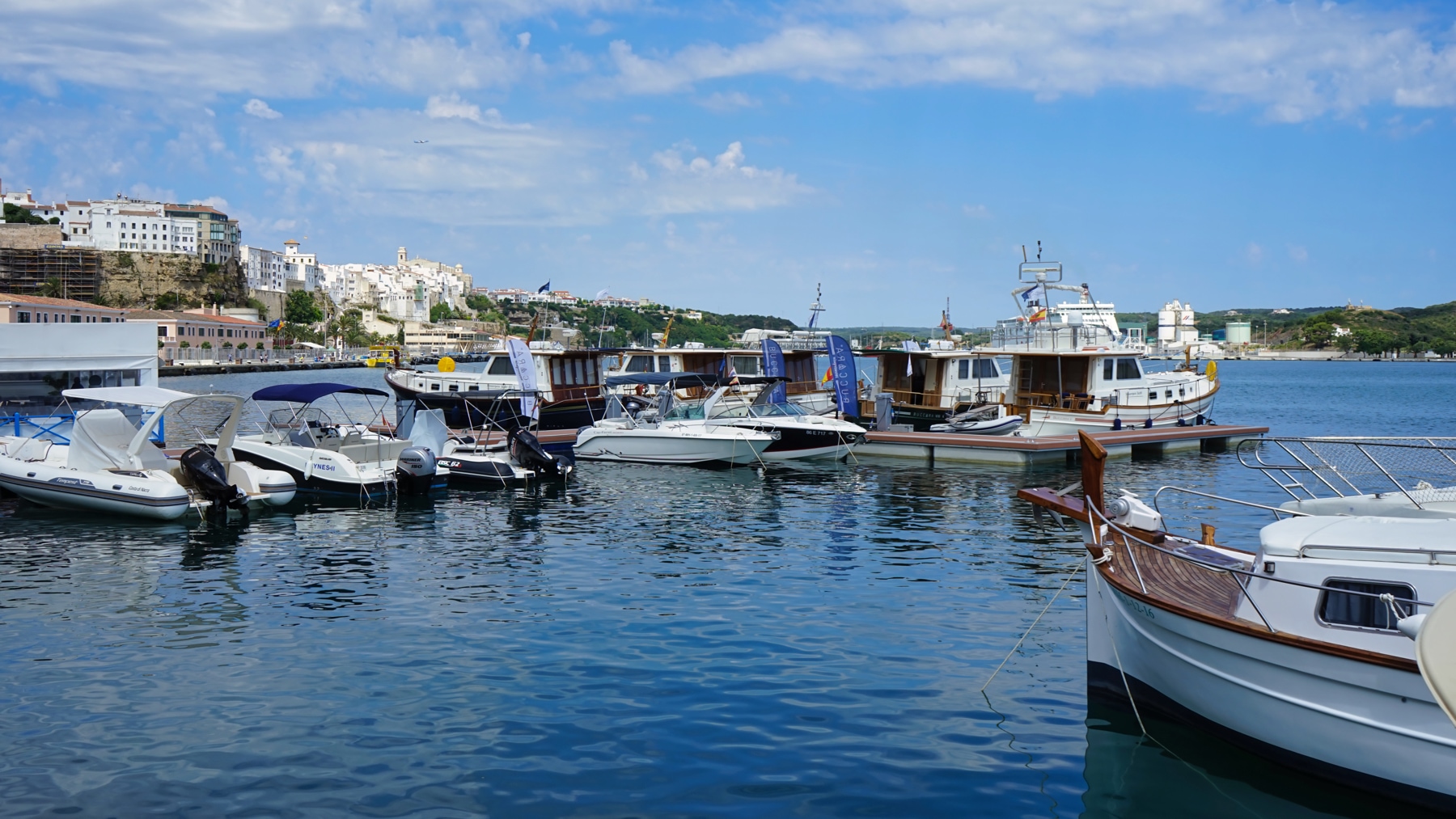 The different viewpoints of the city should not be overlooked. For stunning and unique views of the port, go to Puente es Castell or San Francisco viewpoints located in a green area near vegetable gardens and orchards. 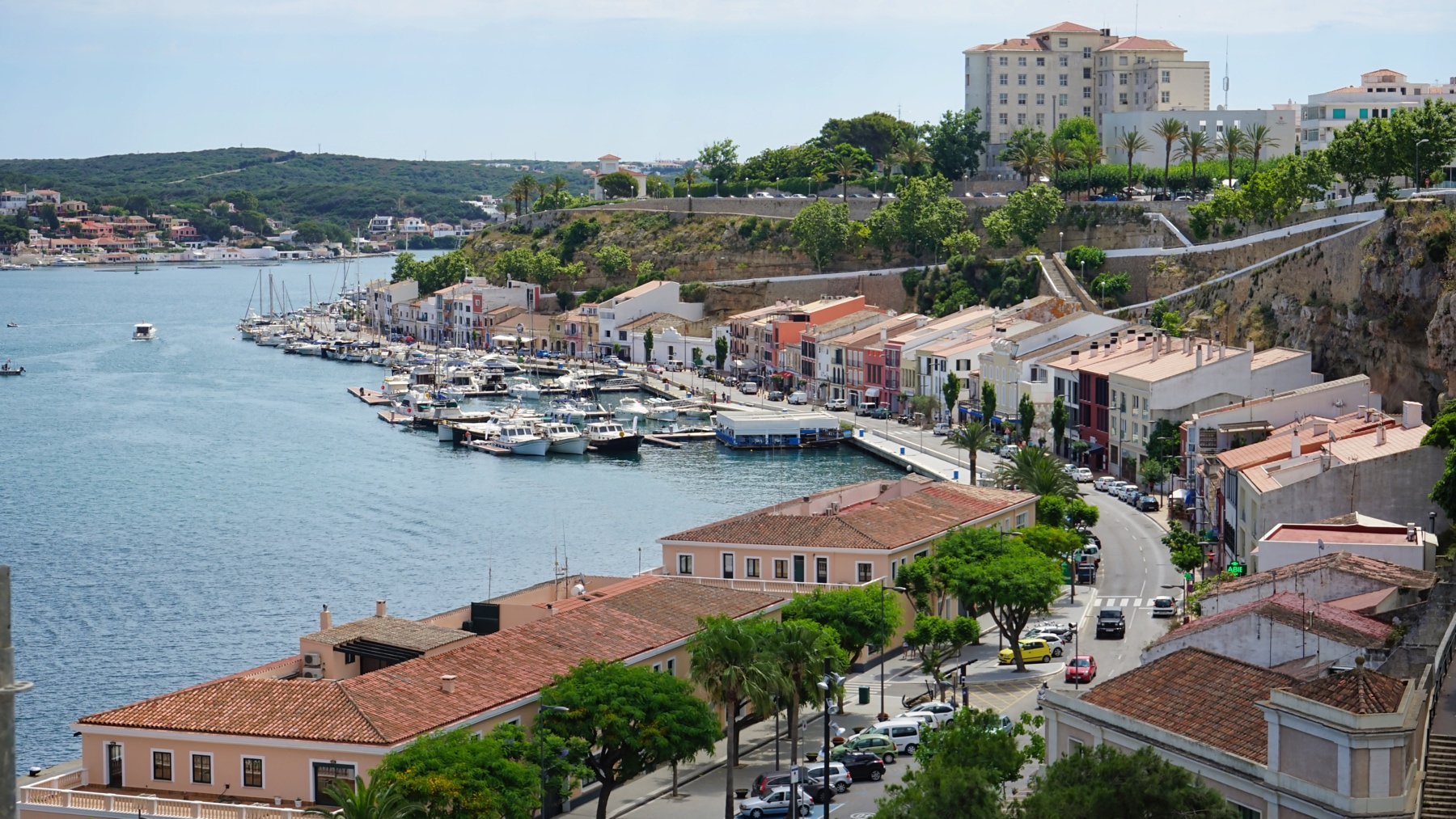 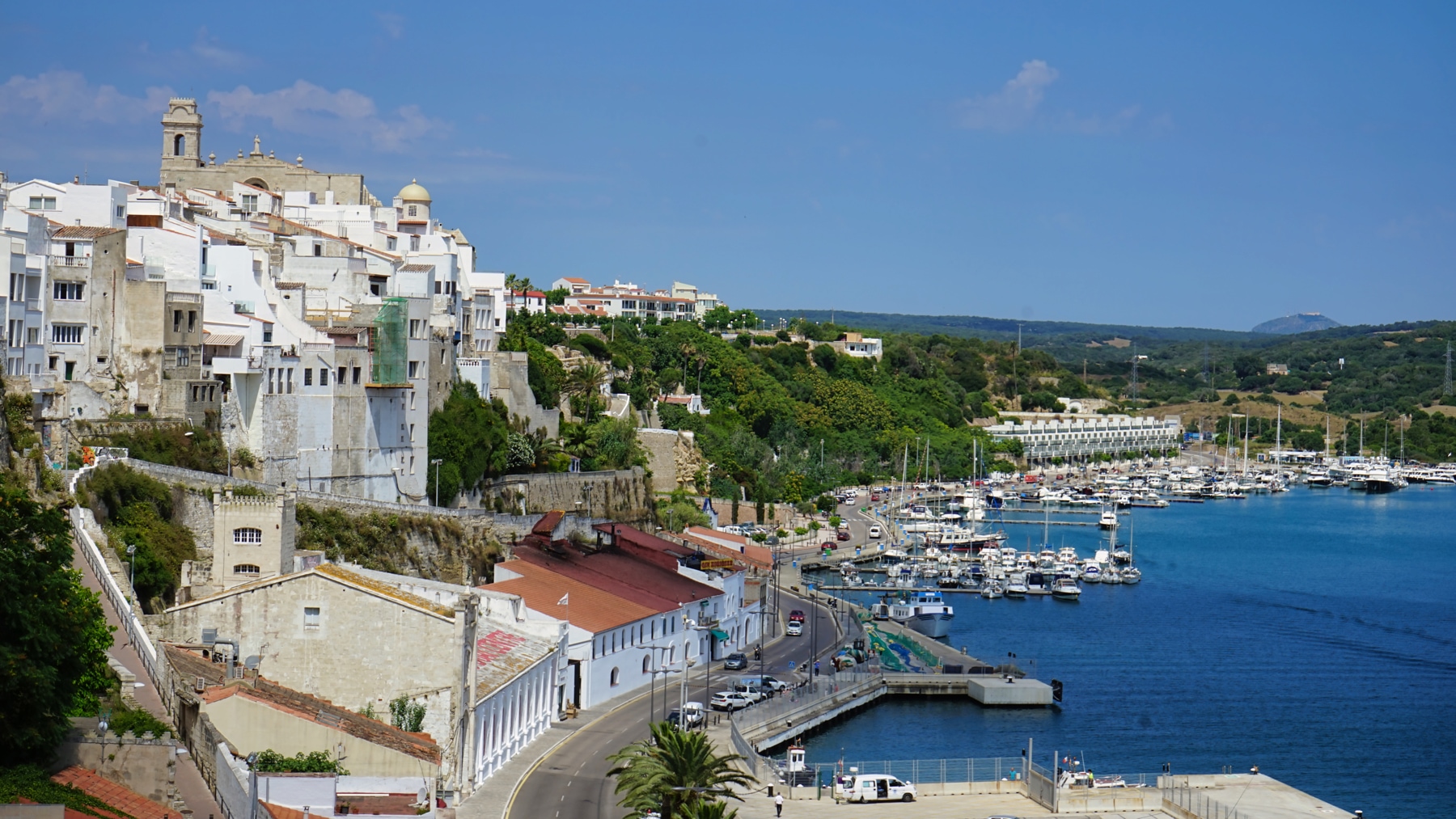 There are 6 strategic points in the city, 6 viewpoints from which to have a very different perspective of the city and the port. If photography is something you are passionate about, this is the place for you. Here we offer a list and where to find them.

Next to the Menorca Museum, this viewpoint was built on the old Franciscans orchards and terraces from which Colàrsega can be seen, the industrial port and the wintering port. Ahead in the horizon rises El Toro, the spectacular highest mountain on the island.

This narrow alley connects the city and the port. Here we can discover a different view, the Moll de Ponent building rooftops. Among them and standing out are the old Mahonesa Electric and the Menorcan Gin Distilleries.

The most recent viewpoint over the port is, in fact, the revival of an earlier one, walled off at the end of the 18th century. This out of the ordinary construction resembles a balcony that hangs from the cliffs. Access to this amazing place is through a passage, allowing the sight of the dock innermost area.

It is the oldest viewpoint in town, since there is evidence of its presence within the primitive Maó Castle, formed by the blocks and streets circling today’s Plaza de la Conquesta. For your delight, there are wonderful views of the castle, framed by Rochina Park gardens and the entertainment area called Pla de Baixamar.

This viewpoint came about with the reform of the Claustre del Carme and the market at the end of the 1990’s. This viewpoint reigns over the port of Maó on the coast of ses Voltes and faces the viewpoint at Pont des Castell.

When the square was developed over the old Carmelite orchards, this viewpoint was raised with views to the Naval Station and the residential area of ​​S'Altra Banda. If we continue along the cornice promenade that runs over the top of the cliffs, we will get a general view of the port of Maó, which, due to its altitude, allows us to enjoy a beautiful panoramic view from sa Colàrsega to the mouth of the port.

Also known as Portal de San Roc and in the square called Plaza del Bastión, it is the remains of the main gate of the wall, which once surrounded this city and it is now preserved.

We can see the two towers still erect today and go over a bridge to be able to feel as we step into history.

It is the main tourist attraction of the port of Mahon and the most important military monument of the Balearic Islands, so paying an admission fee in order to visit it is worthwhile.

It is an enclosure of impressive walls, which had once the mission to defend Menorca from outsiders coming to conquer. It was formerly used as a prison, later as army quarters and today as a military museum.

From here we can see extraordinary views of the port and the perfect sunsets this place is blessed with.

Its environment is declared as a special area for the ​​protection of birds and you can see the migration during the spring.

There are different activities for visitors to do in the fortress and make this visit complete, such as guided tours, exhibitions, concerts, horseback riding or buggy excursions.

Mahón has several islands or islets, all of different sizes, in the port of Mahon.

Quarantine Island and Pinto Island: these 2 are for military use.

Lazareto Island: it is the largest, located right behind La Mola Fortress. Conferences, courses and scientific events are held in a building to be found there. In the past, it was the place where people arriving in the island were quarantined if found to be infectious.

Islote del Rey or King’s Islet: here was the place where King Alfonso III disembarked to conquer Menorca from the Muslims. This island can be visited on Sundays with a guided tour. We can access the 1711 Naval Hospital free of charge and see interesting medical tools of the time used to assist those soldiers wounded in battle. How fortunate we are today!

The yellow catamarans can take you from the port to these two islets.

It is in a rather ruinous state, but it can still be visited. The schedule and the rate may vary according to the time of the year.

The particularity of this castle is the labyrinthine underground galleries built on different levels over three centuries by the Spanish and the British. The construction began due to the famous pirate Barbarroja as means to protect the city.

We can reach the castle by car, bus or on foot from Es Castell (1 kilometre).

Known as Georgetown for the English, it is a small fishing village 3 kilometres from Mahón centre, where the British influence on Menorca can be appreciated.

The location of Es Castell, easternmost zone, makes it the first place in Spain where the sun rises.

The fascinating Military Museum is in this town and it is open to visits, with an admission fee of €3. With a striking red colour, this building is to be found across the town hall. Tickets to visit San Felipe Castle can be bought in the museum.

In the village, you will find an area called Cales Fonts. It is an old pier transformed into a leisure area by its many bars, restaurants, craft shops and pubs, which make it an ideal place to go out at night.

It is located in Cala Sant Esteve, in Es Castell. It is a military construction built by the English and excavated in rock and subsoil, giving a peculiar shape to its galleries. The Council of the Island of Menorca has enabled it as a museum and has recreated the original atmosphere in the different chambers, which we can experience while visiting the underground. The admission fee is €3 for adults and free of charge for children under 8.

D'en Penjat Tower or Tower of the Hangman

It is a defence tower built by the British, which is located near Malborought Fort and served to protect the port. It owes its name to the fact that there used to be a gallows on top of a hill used to render justice.

Maó has wonderful beaches where to be stunned by the turquoise colour that characterizes the waters of Menorca, created by the seabed reflecting the sunlight. Great examples are Cala Mesquida, Cala d'En Tortuga, Es Grau beach or Cala Tamarells.

We also recommend that you go to Cala Sant Esteve, in Es Castell town.

Cala Sant Esteve is the starting point of the route to Cala Rafalet or Punta Prima, which is part of Camí de Cavalls and all are extraordinarily beautiful to visit.

Sailing with a yellow catamaran is a pleasant experience. They tour the port and allow you to observe all the interesting corners and historical monuments such as La Mola or the Lazareto Island Quarantine Hospital. Let the sea breeze be your companion!

You will find them on Moll de Llevant Street and the office is located in the old marine station.

You will find an infinite variety of restaurants in Mahon, many of them along the port, a perfect place for you to enjoy a great evening. Mediterranean, Italian and Asian cuisine, tapas bars, grills and seafood restaurants are some of the options to choose from.

You can find several hotels with swimming-pool and spa and boutique hotels in Mahón centre that make guests’ stay special, luxury hotels and also some rural hotels. If you are looking for a more affordable stay, there are also hostels in this area.

If you are longing for tranquillity, you will find several agritourism places to spend a relaxing vacation on the outskirts of the city.

There are other interesting places to visit bear Mahon, such as the impressive lighthouse called Faro de Favaritx found in a very peculiar landscape, or the  Albufera des Grau Natural Park.

Binibeca is a town that you should not miss out on because it will surely amaze you.

Talatí de Dalt is a prehistoric settlement 4 kilometres away from Mahón, one of the most important in Menorca that has various talayotic remains and monuments. The brochure that is given out at the entrance is meant to guide the visitor on the background of all the different structures, making the visit more interesting while learning along the way. Adult admission fee costs €4 and children under 8 can access for free.

Trepucó is another talayotic village, 2 kilometres away from Mahón and one of the largest on the island. It is interesting to see, but maybe less than the previous one.

What is happening in Mahón now?

The most beautiful places you can visit 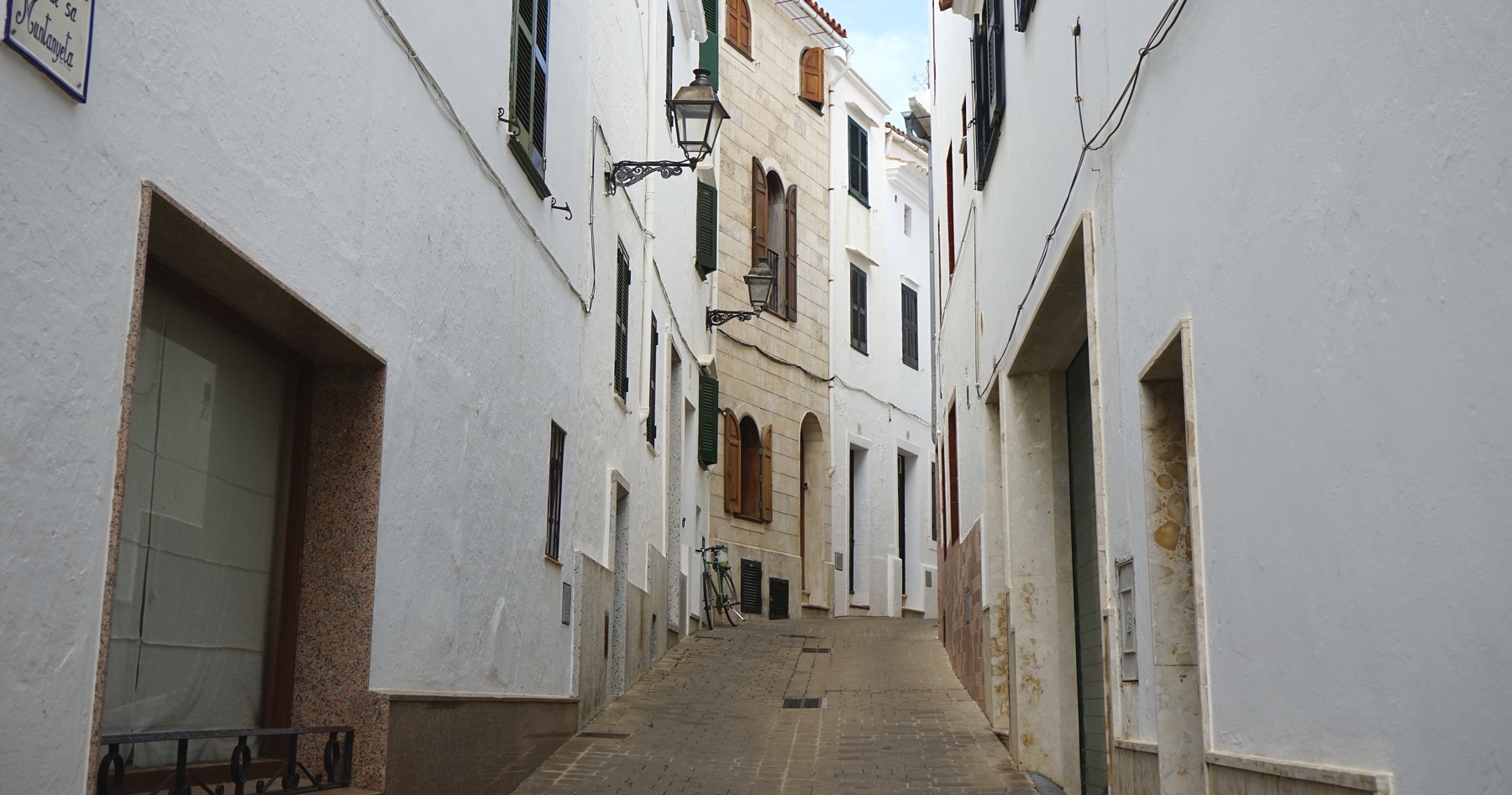 The land of talaiots and crafts 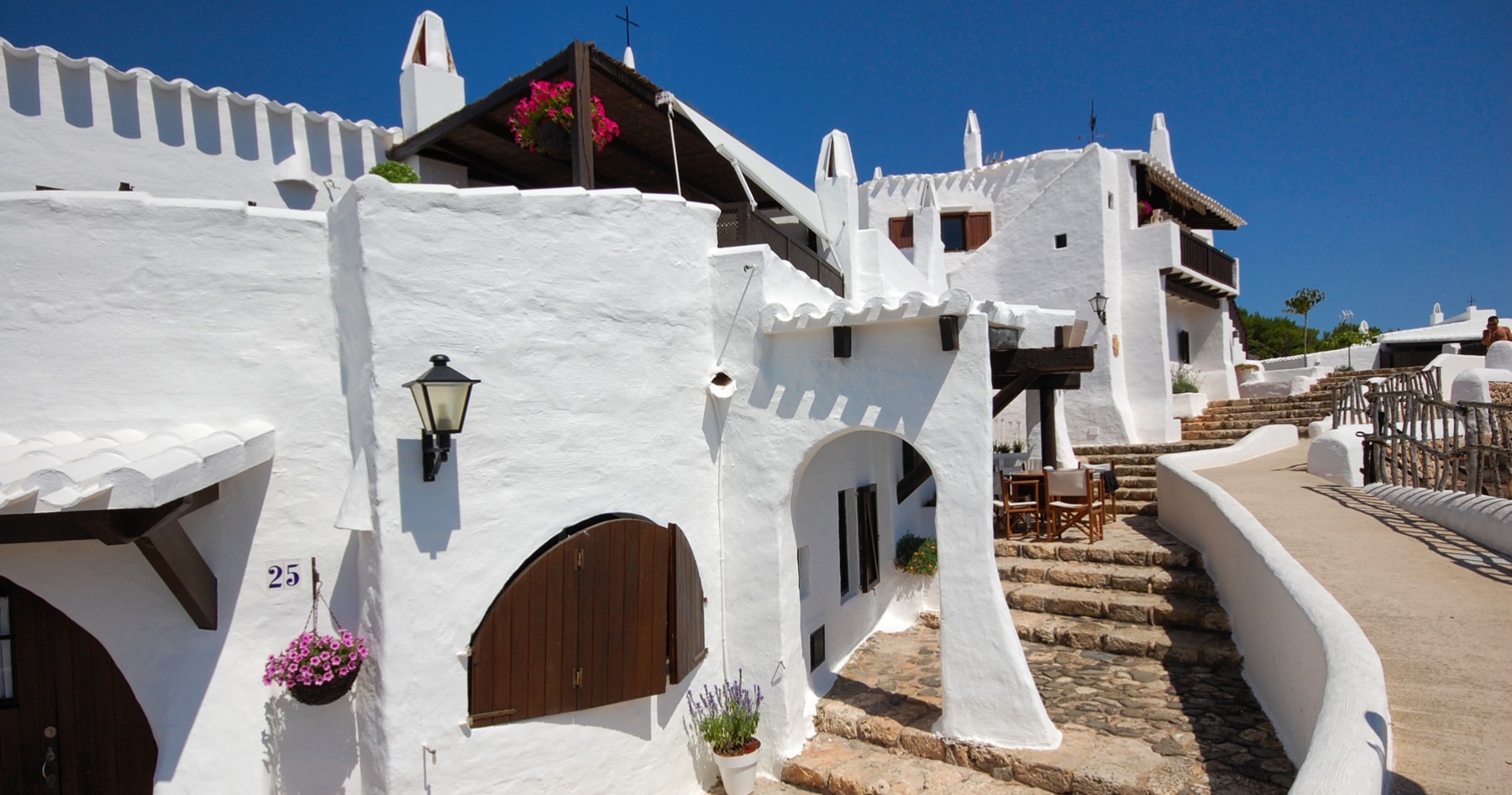 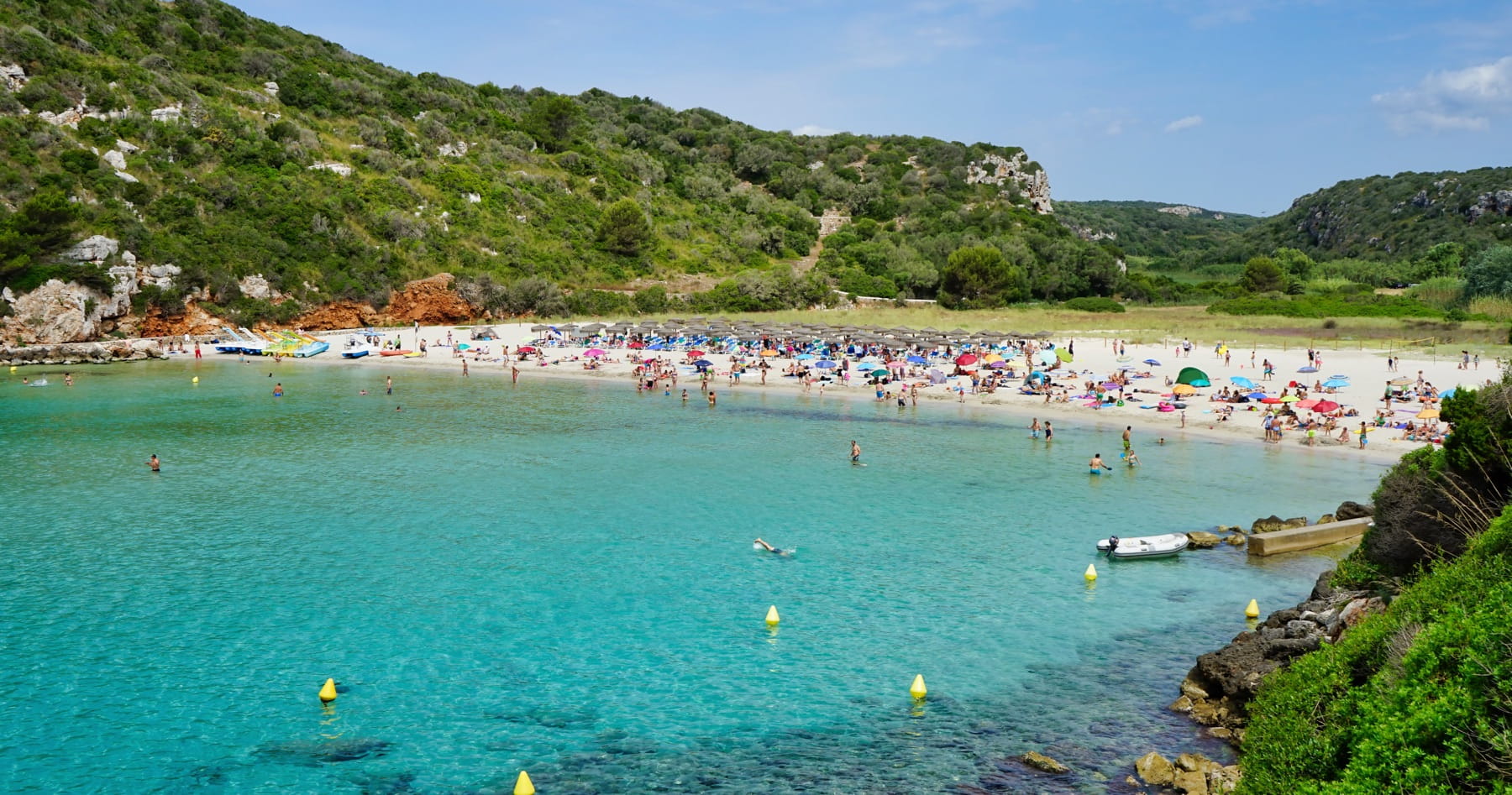 A wonderful cave awaits you 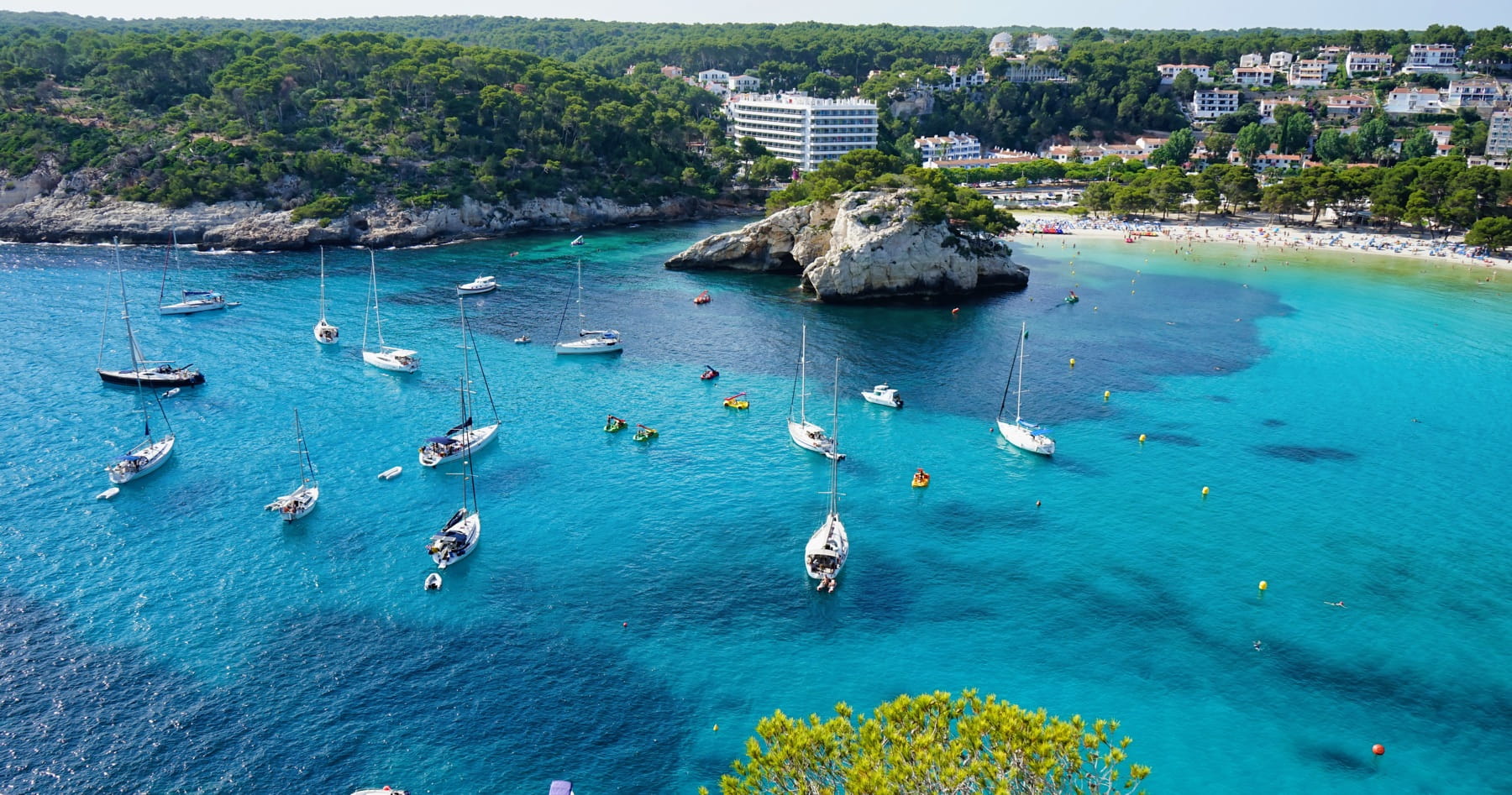 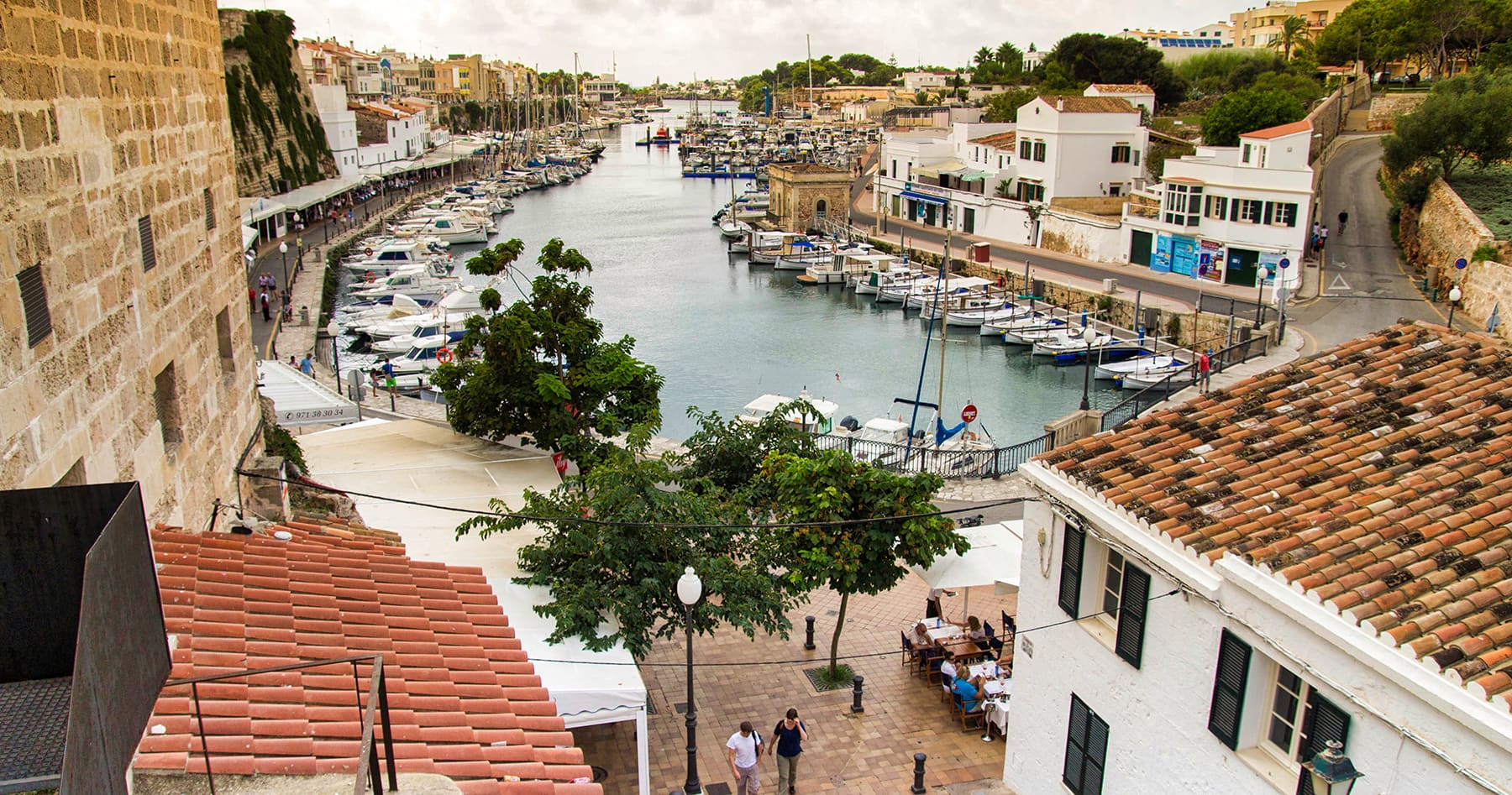 The most dazzling city in Menorca 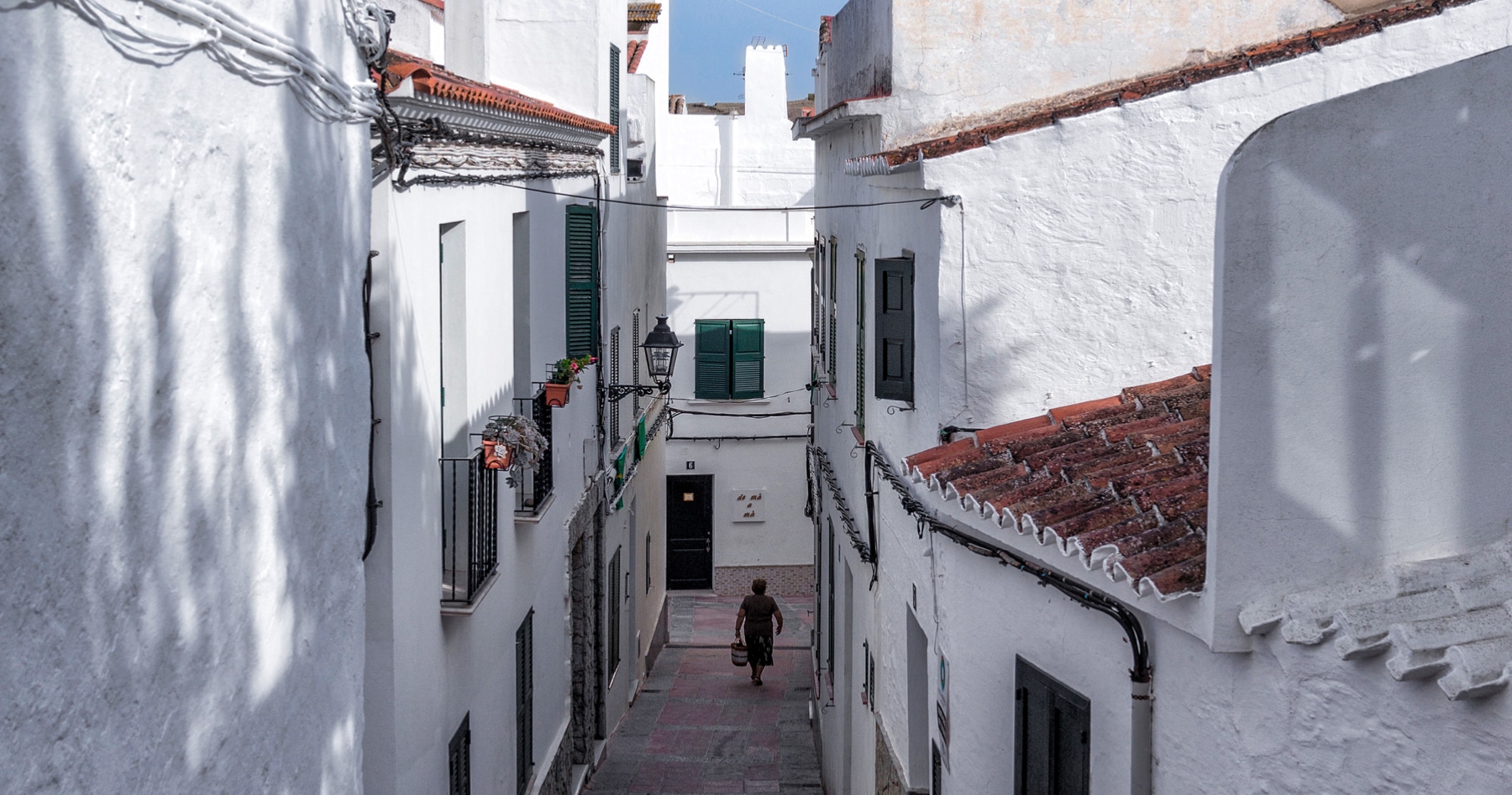 Serenity and relaxation in the centre of the island